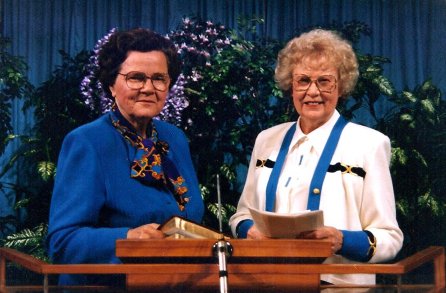 BERNICE GERARD, named by The Vancouver Sun in 2000 as the most influential religious figure in BC in the 20th century, left her mark in both Christian ministry and civic politics. She proved that evangelicals can effectively combine their faith and social action to become the genuine "salt of the earth". Bernice, known to be courageous, controversial and profoundly spiritual, was a well-recognized Vancouver public figure, a minister, a university chaplain, a city council member and a radio/ television host. She was a leader among leaders.

Orphaned at birth, Bernice was adopted by an aboriginal family. Her adoptive mother did not live long which made her early childhood years difficult. While teaching in the interior mining town of Rossland, Bernice met two Pentecostal evangelist sisters, Velma and Jean McColl. Together, they toured across North America and into Europe. Many of the visits to Canadian and American cities resulted in the planting - directly or indirectly - of some 200 new churches. When Jean McColl married and moved to the United States, Bernice took over the preaching duties and Velma became the behind-the-scenes organizer.

In the early 1970s Bernice and Velma, now married to Dick Chapman, settled in Vancouver and founded and pastored Fraserview Assembly. For many years the church doubled as a TV studio for their nationally broadcast Sunday Line programs that reached thousands of followers from the 1970-2000.

Bernice was passionate to help in anything to further the gospel. She was a networker. She was a gracious lady, but ethical, and one who didn't compromise. She spoke out for what she saw to be the biblical view of life and family. Her decision to run for city council, in 1977, was rooted in her pastoral activities and her chaplaincies at the University of British Columbia and Simon Fraser University. Bernice was co-founder of the Pacific Academy, a private Christian school in Surrey. She was involved with many boards across Canada, including that of 100 Huntley Street. She was involved in Christian-initiated cooperative housing in Richmond and downtown Vancouver. She was a staunch supporter of the nation of Israel - leading tours to the Middle East, where she encouraged visitors to plant trees as a means to help in what she saw to be biblically-mandated reforestation.

"At 12 years of age, people came preaching the gospel at the country schoolhouse," Bernice says. "My heart said yes from the first intimation of the Gospel. The simple Gospel made such an impact on me. They told me there was one whose name was Jesus, who took little children up in his arms and blessed them. He was totally loving and kind. I gave my life to the Lord."

Read Converted In The Country by Bernice M. Gerard (published in 1956)

Read a sample chapter (Just Being A Woman) from Bernice's Autobiography - Bernice Gerard: Today and For Life (published in 1988)

Bernice and Velma's legacy continues to touch and inspire the lives of many as Sunday Line and World Ministries brings hope and care to children and families around the world and impacts their lives with the Gospel of Christ. 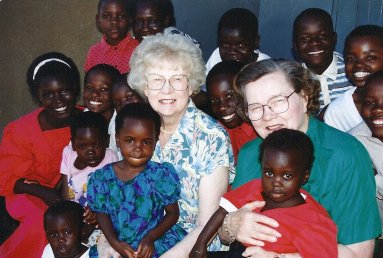 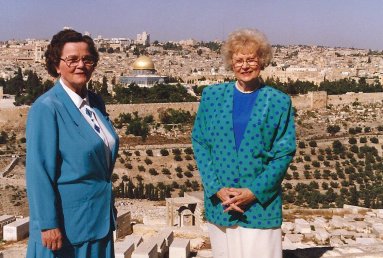